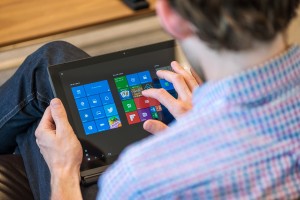 The technology in your laptop’s display hasn’t changed over the last several decades. With the exception of a few very early models from the 1980s, they’ve generally relied on LCD panels.
That was to their benefit for many years, but it’s recently become a drag. The problem? LCDs need a backlight, and it can’t be turned off completely (if it were, you wouldn’t be able to see what’s on the screen). LCD screens have a glow to them, even when they’re supposed to show a pitch black screen.
Videophiles hate that, which is why plasma televisions were the favorite of home theater junkies. Today, plasma’s crown has been stolen by OLEDs – and laptops are getting in on the action. It’s a major leap forward, but are OLED laptops ready to shine?
Your eyes will see the difference
There’s a good chance that you’ve never witnessed an OLED television or laptop before (the tech is common on phones, but the implementation often isn’t quite the same). You may be wondering what the big deal is. Allow me to present a graph.
OLED-Laptop-Graph-Display-Contrast-Ratio
Here, you can see the measured contrast ratio of the two OLED-equipped PCs we’ve reviewed, compared to two of the best LCD laptops we’ve ever reviewed. Quite a difference, isn’t it? The sensor we use to test laptops – Datacolor’s Spyder5Elite – reads zero luminance from these OLED screens when they display a perfectly black image. So the contrast ratio soars as high as the display’s maximum brightness allows.
Now, don’t get too excited. The raw numbers say an OLED screen is somewhere around a zillion times better than conventional LCD. In fact, the benefit of contrast ratio does have limits, because your eyes – and the content you view – have limitations.
What you will notice is the display’s black levels. The gray haze you’re used to see in movies and games is gone, replaced by pure, inky black. You’ll even notice it in more mundane tasks. Web pages suddenly look so precise, so vivid, that they’re comparable to a printed magazine.
Battery life is the catch 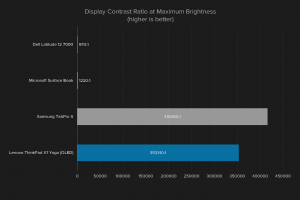 There’s no question that OLED does great things for image quality. The two systems we’ve tested — Lenovo’s ThinkPad X1 Yoga and Samsung’s TabPro S – have the best displays we’ve seen on a PC. In addition to huge contrast, the OLED panels have a wide color gamut and solid gamma curve. Color accuracy isn’t the best we’ve seen, but it’s not bad, either.
Going OLED decreased battery life between 10 to 25 percent, depending on load.
Still, we have found a downside. Portability.
Lenovo’s ThinkPad X1 Yoga proved the perfect testbed for this, since we’ve reviewed it both with and without the OLED panel. The standard IPS LCD screen even matched the OLED panel’s resolution, so it was as close to apples-to-apples as possible. Here’s what happened.
These results were clear and consistent. Going OLED decreased battery life between 10 to 25 percent, depending on load.
We saw the biggest drain in Peacekeeper, a web-browsing benchmark. It happens to have a white background around the test itself, so it’s bright. Our video test, meanwhile, saw the smallest variation. That makes sense, as the clip (a trailer of The Avengers) has many dimly let scenes.
OLED-Laptop-Graph-Battery-Life-Minutes
Why does battery life shorten? It appears that, with current OLED panels, a fully lit screen uses a bit more power than an LCD screen. Remember, there’s no backlight with OLED. Instead, each individual pixel is lit, as needed. When all the pixels are lit, they’re downing a lot of juice.
This result isn’t great for OLED – but it’s not a disaster, either. A laptop that has 5 hours of battery life might be reduced to 4 hours if OLED is swapped in. That’s bad if you need 5 hours, but inconsequential if you rarely use more than 3 hours at once.
So, should you buy OLED?
Samsung’s TabPro S includes an OLED display as standard equipment. Otherwise, it’s an added-cost option. Tacking it to the X1 Yoga is currently a $125 charge. HP’s Spectre x360 offers it as part of a top-tier, $1,500 configuration. Alienware did offer OLED on its Alienware 13 as part of a $1,300 configuration, though it appears to have gone out of stock.

The average person, who’s looking at a $600 laptop, doesn’t need to think about OLED just yet. It’s an expensive option, and it may not show up in mainstream systems for a few years yet.
If you’re already considering a premium system, though, we think OLED is worthwhile – despite the premium. Your laptop’s display is one of the few components you’ll rely on every moment you use it. It can’t be replaced, and it doesn’t rapidly go out of date.
In fact, given the choice to spend extra cash on an upgrade to OLED, or an upgrade to the processor, you’re probably better off ticking the checkbox next to OLED. As long as you don’t mind sacrificing a bit of battery life, that is.
Editors’ note: An earlier version of this article erroneously used the term LED in place of LCD. We apologize for the mistake.
Read more: https://www.ntcsupply.com
Follow us